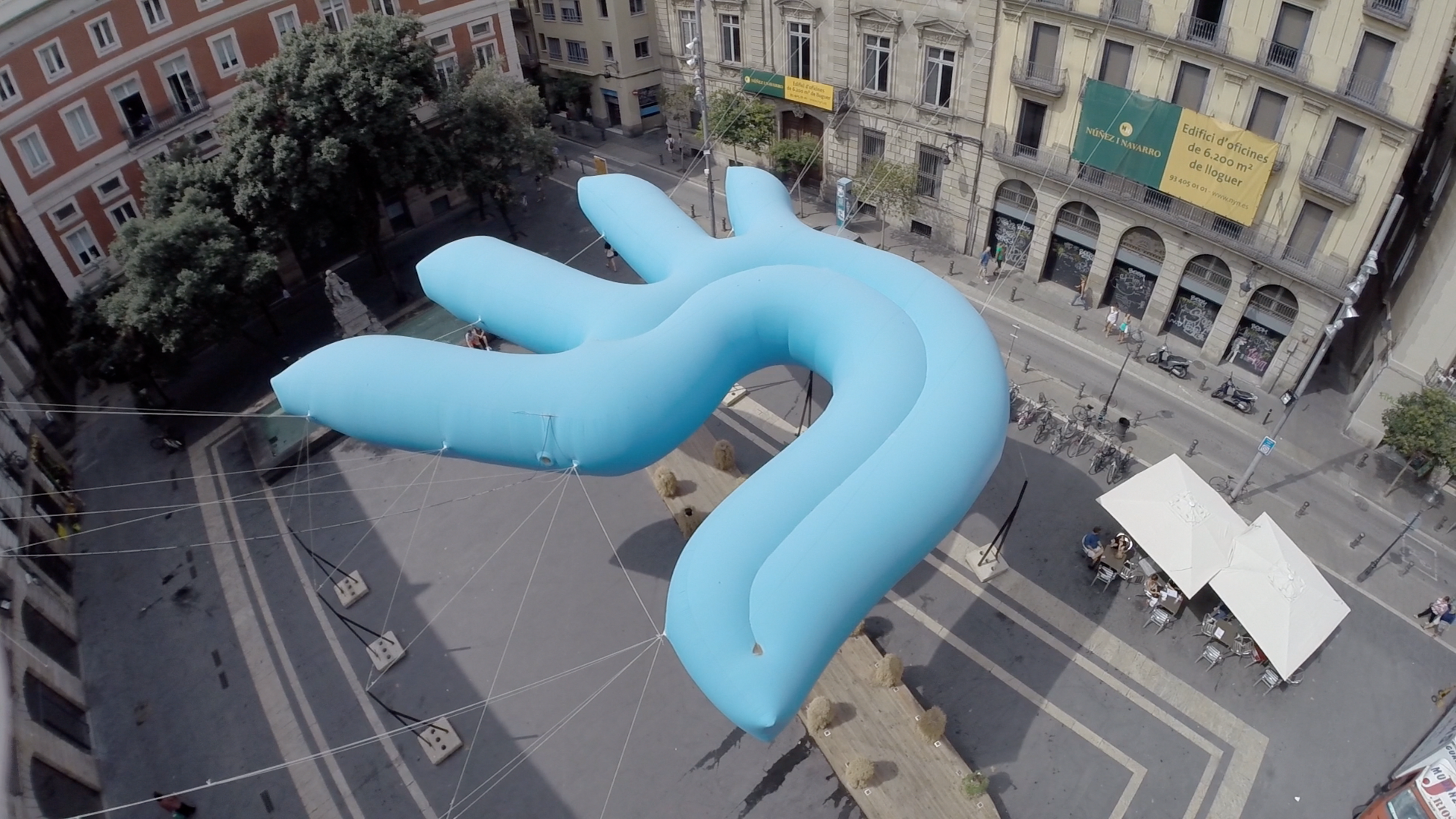 Barcelona’s tercentenary commemoration festival – the RE.SET BCN – celebrated during summer 2014 “the universal fight for freedom”. It included seven installations, placed in seven locations in the old part of Barcelona,  each dedicated to a different theme such, Memory, Identity, Diversity, Liberty, Europe, and Democracy, yet, all related to celebrating freedom in society.

Our site was Placa de la Merce, an important square in the livelihood of Barcelona, with one of its beloved churches, uniquely entitled ‘The Basilica of Our Lady of Mercy’, (in Catalan: Basílica de la Mercè), and we were asked to refer throughout the installation’s design to the word DEMOCRACY.

The protection of human rights of all citizens is one of the four core elements of democracy and it’s the one that formed the basis of our project.

Emanating from the very location of Placa De La Merce – where on the southern side rests the Civil Registration building, we created an intervention that refers to the freedom of the individual in a democratic society. The square was dedicated, during the summer months, to the celebration of human rights through the act of civil marriage.

The option of a civil weddings in many countries opened new possibilities and free choice for interfaith marriages, non-religious marriages, and same sex marriages.

Since ‘walking down the aisle’ is the most celebrated moment in religious weddings and in other variations of wedding celebrations, we establish a form of aisle that is flanked by columns of white fragrant flowers (Allysum; Sweet Alison; Lobularia ; Snow Princess), hydroponically, while connected to the city’s water system.

That ramp led to the stage upon which the vows were made whilst the family, friends and public watched from the square all around.

The ramp that facilitated the walk – the entry to a new passage in life – equally facilitated a sustainable watering system to keep the flowers’ flourishing through the sunny hot summer. Both elements had a role and an embedded aspiration to promote progress in the city’s life; promoting human’s well being – freedom of individual choice, a fresh and elevating scent of the Sweet Alison flowers, enhancing memories of great moments in life, as well as promoting water recycling.

The canopy that defined the celebratory space in the square, while shaded it from the sun – was itself in the form and colour of the Universal Human Rights new Logo – established as a symbol to remind the world of these fundamental rights in any civilised society.

That unique logo was designed for that project as a three dimensional large inflatable structure, in the tradition of festivals and street parades and along with its practical roles. The original Two-D-Logo was designed by Predrag Stakic of Serbia and combines the shape of a hand with that of a bird. It was the winning design of an international competition taking place in 2011, and since then it became the universal logo of human rights, available to everyone at no cost as an open source product for the promotion and protection of human rights.

The inflatable was suspended above the square, tethered and supported with cables hanging it from the surrounding buildings, as well as anchoring it to the ground.  The shadow of the human rights unique symbol, moved through the square as the sun moved in the sky, protecting people from the hot sun in summer, as well as alluding to its role in society.

Thus the two tenets of democratic behavior – the personal and the societal were brought here together, taking the celebration from the registration hall out into the one of the most precious and loveable square – Placa de la Merce – in the old city of Barcelona.

It was realised not long before the installation’s opening day that the Silver Wedding of Yael Reisner & Peter Cook took place 25 years earlier, at that very month. Thus, it was decided that the installation’s opening will be celebrated along that private silver wedding’s celebration, and very much like a wedding; a party that was missed 25 years earlier, as the signing ceremony was very short – like most civil weddings – with 3 friends only as witnesses.

In August 2013 Benedetta Tagliabue – on behalf of the Foundacion Enric Miralles and the City of Barcelona – invited Yael Reisner and Peter Cook to design an installation as one out of seven installations, celebrating the 300 years for the annual Catalan festival of Freedom in Barcelona, under the theme of Democracy, placed at the square Placa de la Merce.

Following some political hiccups in early December 2013, the school of architecture, which had to be involved with that very installation’s design process and building, left the project, and was substituted, by January 2014, with the local collaborative group Straddle 3.

Due to that change of the collaborative partner, by January 2014 Yael Reisner started the design anew in the context of Yael Reisner Studio, expecting Peter Cook to join in.

Yet, as it happened, the design in Yael Reisner Studio continued to be developed with Reisner’s team, and though Cook and Reisner were both contracted to design the project together, that momentum stopped in December 2013, when the assigned school left the picture.

Ten days before the opening, on the 1st of June 2014, Peter Cook sent an official letter about the project’s authorship to the production team at the Enric Miralles Foundation:

Benedetta Tagliabue – on behalf of the Fundacion Enric Miralles and the City of Barcelona – invited Yael Reisner and I to design the installation for Placa de la Merce, Barcelona.

Yael reacted to the challenge of this evocative Mediterranean space and its romantic atmosphere, immediately and positively. It is faced on one side by a historical church that holds many Catholic weddings and on the other by the office of Registration: where civil weddings take place.

Moreover, the theme assigned to the installation was related to Democracy. Yael quickly made the connection between the two and hit upon the concept of incorporating the universal symbol for human rights and then conducting civil weddings under it.

So from the first her understanding of the context, conceptual idea and all the subsequent design work has been hers. She has run with it and my only contribution – the title !

Nevertheless, it was explained to us by the Enric Miralles Foundation’s production team, that this letter arrived after the files were sent already to the press, and it was suggested to credit the project in the future and on their website in the form of : Yael Reisner with Peter Cook.

Indeed, the installation’s title – Take my Hand – was Cook’s great idea, and Reisner added to it: Rights and Weddings.

The project’s set of drawings prepared at Yael Reisner Studio.