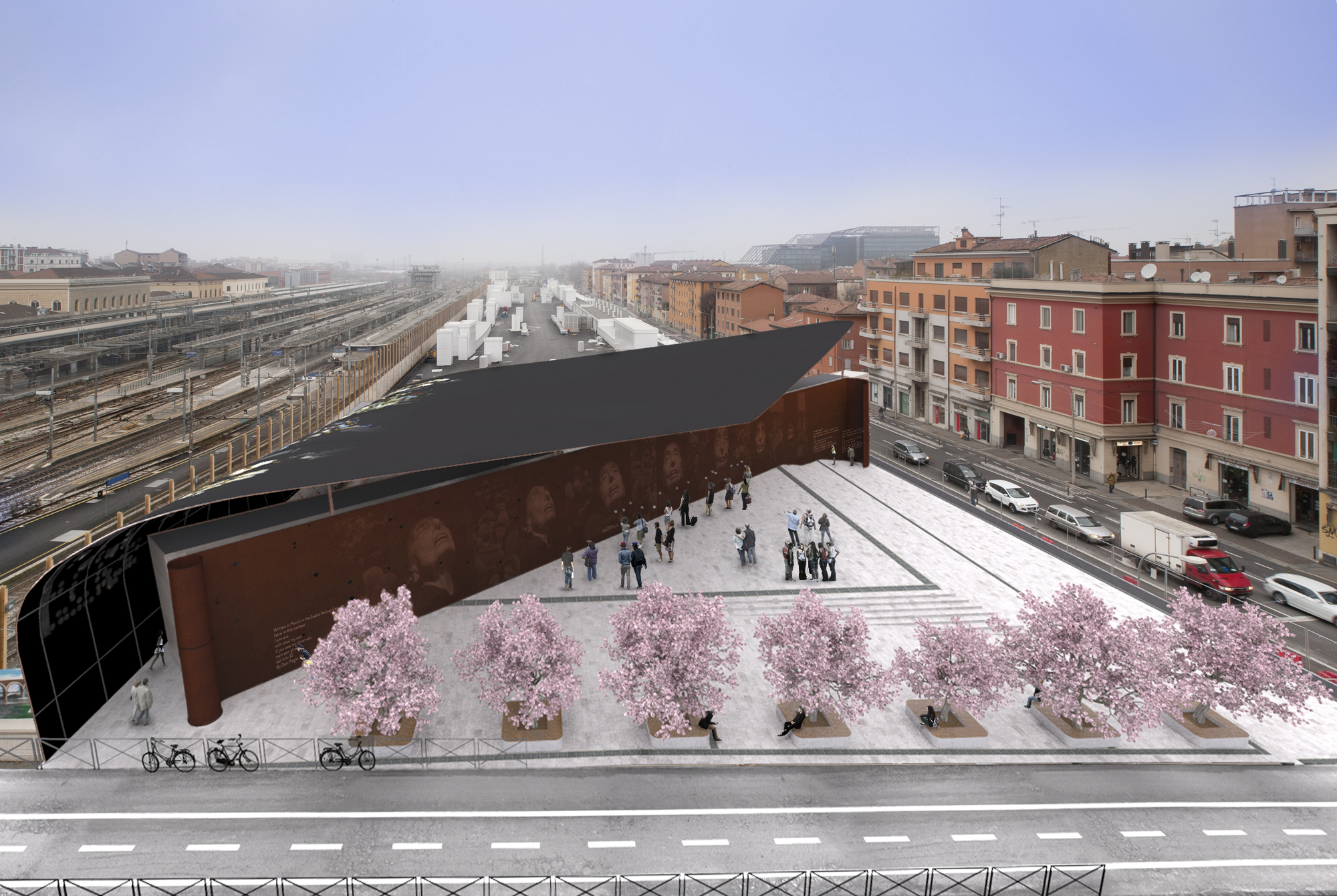 Yael Reisner in collaboration with:

Sound track: The first 1:10 min. of Ravel’s Kadish, for cello and strings, arrangement by Tognetti, played by Steven Isserlis.

While looking above the site with its numerous rail tracks all the way to the horizon, one cannot help but to bring the association with the railway-tracks that led the deportations throughout Europe by the Nazi’s Reichsbhan and the destination to concentration and death camps. Auschwitz was one of them, and until today these railway tracks are still part of the route to get from Bologna to Auschwitz.

The characteristics of the site’s location led us to the main ideas, while a concept of duality prevails through the design. The embedded artwork – photography – aims at adding to the content and its aesthetics, provoking thoughts and emotions in the beholder.

The views from the memorial square, and the epic photography in it, are intentionally very different from the views of the installation from outside the square, where the passer-by will see different imagery.

We aimed at emphasizing the dual relationship of the memories of the tragic history vs. thoughts of an emphatic future, the horror lived by the victims versus momentarily pleasure drawn from beauty in nature. We designed the dividing surfaces so the sunrise light would enhance certain views and atmosphere in the square vs. others in sunset time; the two extreme conditions along the daily light changes as the sun moves through the sky.  Similar light interaction will take place at nighttime with artificial light.

The spatial design was created by two elements: steel ‘scroll-wall’ and a ‘wing’, which together create the design choreography, and the surfaces for the embedded photography.

Two large interactive epic photographs, are embedded – embossed, pigmented, and perforated – on each side of the ‘scroll-wall’ and two other at the ‘wing’, four large frescos, applying new mural techniques, that instead of using paints on plaster manually, it appliess paint on steel surface using digital technologies.

Lines of quotes from Primo Levi’s poetry join in. See further below.

The encoded ‘scroll-wall’ separates diagonally the memorial square into two parts, the opened side (further secluded from the main street by seven local Amarena cherry trees. They are grown in large pots that also serve as public seating).  The interior space is enclosed by the encoded ‘wing’- wall, yet, both parts of the square are exposed to the environment’s elements.

At the Wing wall, similarly, though different in content, there are two juxtaposed photographic epics, embedded in it. Its interior surface portrays a scene of shuttered domestic world and great sadness (as part of the enclosed space in the memorial square), while the exterior surface – seen from outside, along the bridge of Via Matteotti and from Bologna station – communicates colorful abstracted flowers. Our intention here is not to impose the memorial’s experience on the daily commuters out of the square, but enhance the surroundings with the message of beauty and hope, adding qualities to the urban context.

The design pursuit was to explore ways to include imagery in architecture in a fresh way.

The ambition was – after selecting 2-dimensional work by the artist Ori Gersht we collaborate with –  to embed the imagery thoughtfully as part of the new three-dimensional frescoes, embedded in the surfaces that create the spatial configuration of the space and place.

This research work started five years ago – 2010 – with the project A Room for London, (see under Projects), an installation we were investigating architecture as a three dimensional canvas to be inhabited and experienced, exploring light, shadows, spatial depth and beauty as the ingredients that might help to stir an emotional experience in the beholder; aspiring to enhance beauty in architecture and induce human wellbeing by architectural experience. The imagery – both its aesthetics and content  – was an integral part of the overall deign intention. The artist we collaborated with then, 5 years earlier, was Dee Ferris.

In this project, the selected epic photography is by the fine art photographer Ori Gersht, whose compelling stills and videos, captures beauty and violence in the same work, raising its charged, which is equally augmented by his laborious, perfectionist treatment and focused attention.

Gersht’s photography embedded in the Bologna Shoah Memorial, became three dimensional on the Scroll wall, due to the applied digital multi angle perforation techniques, (perforated, embossed and pigmented), where the epic photography affects differently each side of the wall. Yehudith is observed on both sides of the Scroll-wall, like a haunting ghost, thus, the narrative further interact with the viewer, as he/she walks from one side of the Scroll wall to the other, and vice versa.

Some of Gersht’s narratives portray specific associations of wars and conflicts, often transpired through their depicted locations or refugees, while others are arresting due to a violent fluctuation between figurative and abstract; a whole body of work exceptionally beautiful.

Gersht work embedded in the memorial installation’s metallic surfaces is including:

Thus, we got three narratives: one interacting between the two sides of the Scroll wall, and two others displayed on the Wing wall. Yehudith,  Shuttered Mirror  and Blooming, in and out of the memorial square, are there to raise different emotional feedbacks, or, associations in the beholder.

Judith; six stills selected from Gersht’s video: Yehudit Arnon – Will You Dance For Me? 2012.

Yehudit Arnon – Will you Dance for Me? is a film the Gersht made and exhibited in 2012, to tell the story of Yehudit Arnon, who as a 19-year-old was imprisoned at Auschwitz where SS guards demanded that she dance at their Christmas party. When Arnon refused, she was forced to stand in the snow as punishment – an event that forged a commitment to dance if she could survive. Arnon went on to a celebrated dance career, and in Gersht’s film she dances one more time and recalls the moment when “for the first time in my life, I was able to say no.”  We selected few stills of Judith – in Hebrew Yehudit – from this film, to be added to the Scroll-Wall, the front facade of the Bologna Memorial Square.

On Reflection, 2014, by Ori Gersht, and the six stills selected from it to be embedded at both sides of the Wing wall.

As one can see in the next images I chose 6 stills from that On Reflection video photography , three per side of the Wing wall, each becoming a triptych fresco, capturing opposite qualities. One triptych I called Blooming and the other Shuttered Mirror.

Blooming – the large a Triptych Fresco embedded at the Wing wall’s exterior, the view from the outside world, from the street people walk along, the exterior view of the Bologna Memorial Square from the street Via Matteotti, and its bridge part, above the railways tracks.

Shuttered Mirror – the large triptych fresco is embedded on the interior side of the Wing wall, that together with the scroll wall creating the enclosed part of the memorial square, the Shuttered Mirror Triptych is viewed while one is inside the memorial, and it portrays a scene of a devastated domestic world.

Is anything sadder than a train
that leaves when it’s supposed to,
that has only one voice,
only one route?
There’s nothing sadder.

Except perhaps a cart horse,
shut between two shafts
and unable even to look sideways.

Consider whether this is a man,
Who labours in the mud
Who knows no peace
Who fights for a crust of bread
Who dies at a yes or a no.